To make a proper Ragù Bolognese, you’ll need to start in the morning. It’s an all day affair. Luckily, most of the time is inactive, meaning you can work, watch tv, exercise, knit, mow your yard, paint a picture, clean your house, play with your dog, do yoga, or all of the above, all while preparing the most mouth-wateringly delicious meat sauce you’ve ever tasted. Of course, if you’re making a Lasagna Bolognese, you’ll want to spend some of the inactive time preparing the pasta and the besciamella (recipes for those will be coming soon!)…but I’m getting ahead of myself. This is a delicious sauce in it’s own right and it’s nearly as scrumptious served over boxed pasta (though it’s better over fresh tagliatelle or pappardelle) or polenta as it is layered into lasagna.

What is Ragù Bolognese?

Ragù Bolognese is first and foremost a meat sauce. I like to add tomatoes, but some purists omit them, save for a tablespoon or two of tomato paste. Some people insist on a mix of veal, beef, and pork, while others add chicken livers for added body. I’ve found that once it’s cooked for several hours, the veal is undetectable and the chicken livers are redundant (the sauce is rich enough), so I stick with what’s easy to find – ground beef and ground pork.  Traditionalists balk at the idea of adding garlic…but somehow it always seems to make it in my pot and I haven’t received any complaints. Some (including me) add milk or cream at the end to help tenderize the meat and give the sauce a velvety texture. What’s (relatively) indisputable is that they must contain meat, soffrito (a mix of carrots, onion, and celery), and wine (though whether you should use white or red is hotly disputed). All that to say, Ragù Bolognese has many variations – the recipe I’m offering is by no means the end-all-be-all, or 100% traditional. It is, however, 100% delicious.* For a thorough breakdown of Ragù Bolognese and its sister sauce from southern Italy, Neapolitan Ragù, check out this wonderful article from the Washington Post.

**Because those people are my parents and my husband and they have to live with me in an 800 square foot house, their responses may not be completely reliable***

How to Make Ragù Bolognese

Perhaps unsurprisingly, the method for making Ragù Bolognese is also a contentious subject. Some brown the meat, others cook it more gently for fear of it becoming tough and dry. Some simmer it on the stove, others in the oven. Some cook the meat and veggies separately, others cook everything in one pot. Because Ragù Bolognese is a braise at its core, I treat it as I would any other braise: I brown the meat first, cook the veggies in the rendered fat, add liquid, then cook in the oven at a low temperature for several hours and finish the sauce on the stovetop. Refer to the compelling stats above about how delicious it is. 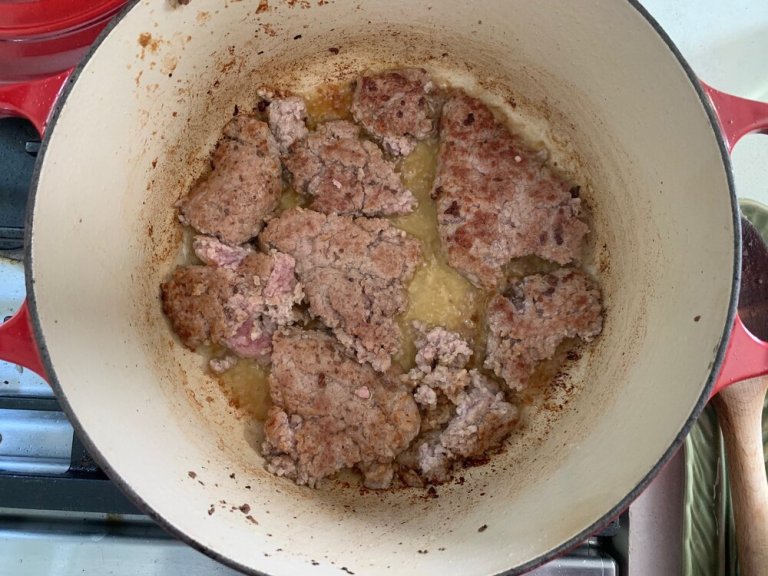 Browning the pork for Ragu Bolognese 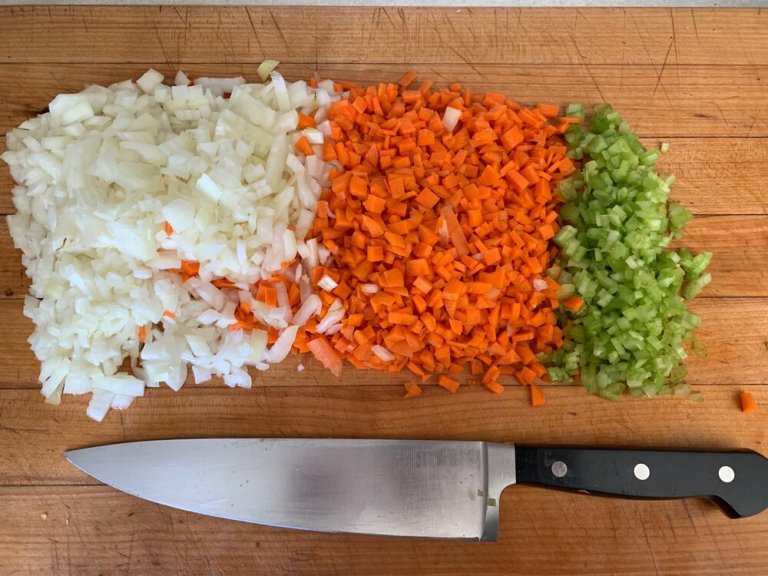 Soffritto – a mix of diced onions, carrots, and celery 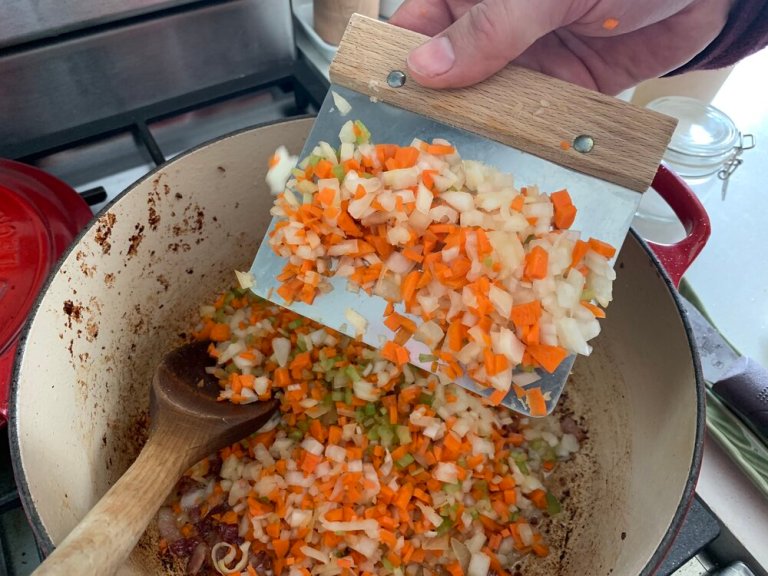 Cooking the soffritto in the rendered fat 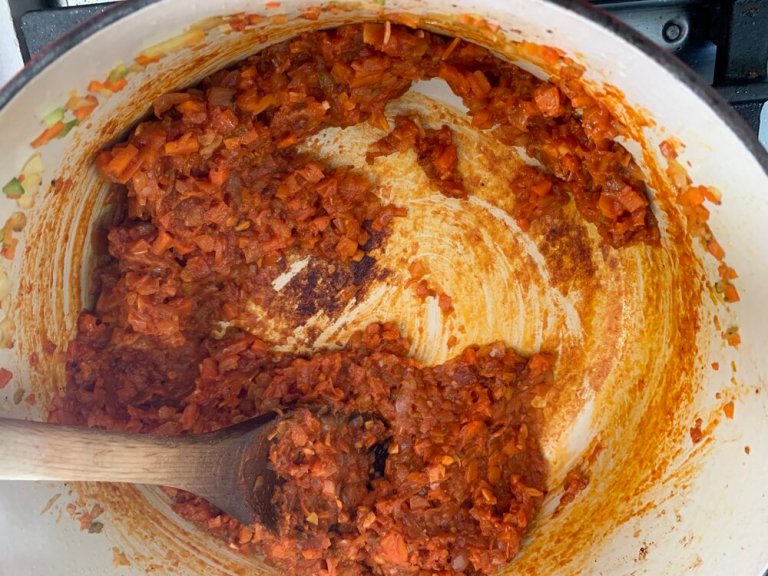 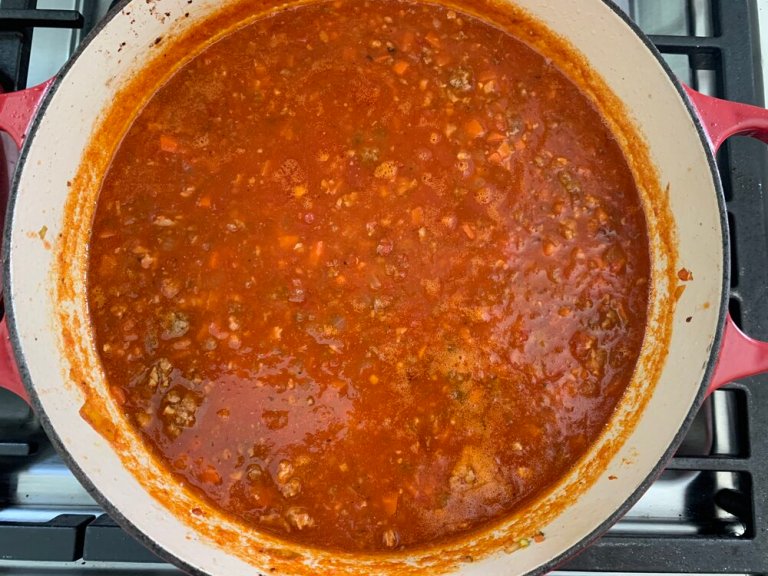 The ragù before it goes in the oven 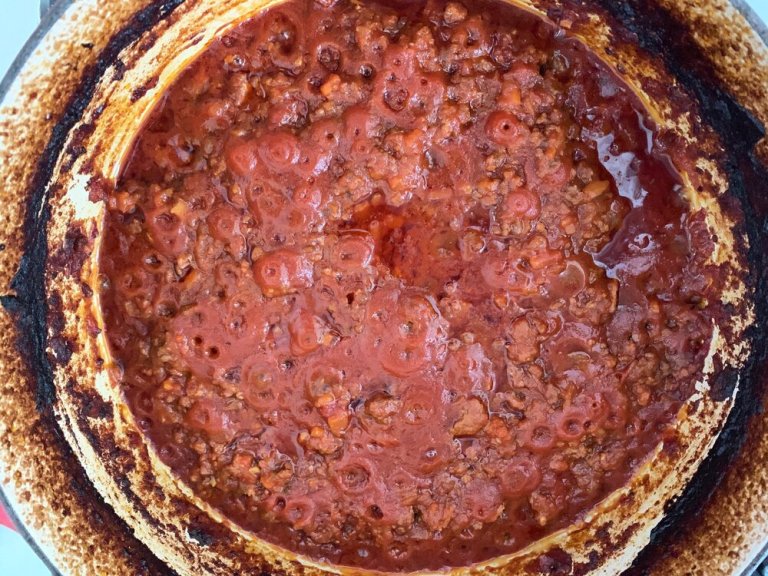 The rage after it comes out of the oven

Heat olive oil in a large heavy bottomed pot over medium-high heat. Add beef and press into a thin layer with the back of a spoon. Cook undisturbed until browned on the bottom and crisp around the sides, season with salt and pepper, and break the meat into large pieces. Flip the meat and allow it to brown on the other side, then break it into small pieces. Remove the meat from the pan with a slotted spoon and reserve. Pour off all but 1 tablespoon of the fat and repeat the process with the ground pork.

Pour off all but one tablespoon of the pork fat, reduce the heat to medium-low and add the pancetta or bacon. Cook, stirring occasionally until the fat is rendered and the meat is beginning to crisp. Add the carrots, celery, and onions to the pan and season the mixture generously with salt and pepper. Cook until the onions are just beginning to brown around the edges and the other vegetables are completely softened. Turn the heat up to medium and add the tomato paste. Cook, stirring frequently until the tomato paste darkens and begins to stick to the bottom of the pot.

Deglaze the pan with the white wine, scraping up any browned bits with a wooden spoon. Stir in the chicken stock and tomatoes and bring to a simmer. Add the bay leaves and grate in a pinch of nutmeg.

Transfer the pot to the oven and cover with a lid, leaving it slightly ajar. Cook for 4-5 hours (or more!), scraping down the sides of the pot occasionally. The sauce is finished when them meat is falling apart and the liquid has reduced and thickened significantly.

Remove the pot from the oven and transfer to the stove top. If there is a large amount of liquid fat at the top of the sauce, spoon some of it off (leaving a bit behind for flavor). Turn the heat on low and slowly stir in the the milk. Allow the sauce to simmer for 30-45 minutes, stirring occasionally, until all the milk has been absorbed.

Serve with pasta* or polenta (be sure to top with plenty of parmigiano reggiano) or incorporate into a lasagna.

*Note: If you serve this with pasta, add some of the pasta water to the sauce to thin it out slightly, then toss the pasta with the sauce.

Dreaming of travel to Italy or some other European destination? We can help with that! We are here for your custom trip planning to Italy, France, Ireland, the UK and all of Europe. We are experts in creating custom travel itineraries and leading small group trips to European destinations. We also book European cruises! Feel free to reach out via email — We’re always available to talk about travel!

Chelsea is one third of the Euro Travel Coach team (and is the daughter of the other two thirds of the team, Greg and Betsy). She has a passion for food and wine and has a background in hospitality. She attended Cornell University’s School of Hotel Administration and interned with two of New York City’s best restaurant groups while she was in school. After graduation she worked at the number one wine auction house in the United States, Chicago’s Hart Davis Hart Wine Co. There, she organized various wine centric events for HDH’s most valuable clients. She and her husband moved to Copenhagen, Denmark in 2016 and then to Bristol, UK in 2018 and have traveled extensively during their time living in Europe. Her expertise in food and wine and her experience living abroad helps her to find amazing accommodations, delicious restaurants, and unique experiences for Euro Travel Coach clients.

Thank you for subscribing!